NextChem, the ideal link between the electrons’ world and the world of molecules for the decarbonization of industry

Hydrogen is establishing itself as a key element for the energy transition. Hydrogen, in fact, is at the center of the challenges related to global warming. Its characteristics make hydrogen a fundamental energy carrier, as it is usable as a fuel and as a feedstock in many industrial processes, it is storable and transportable over long distances. 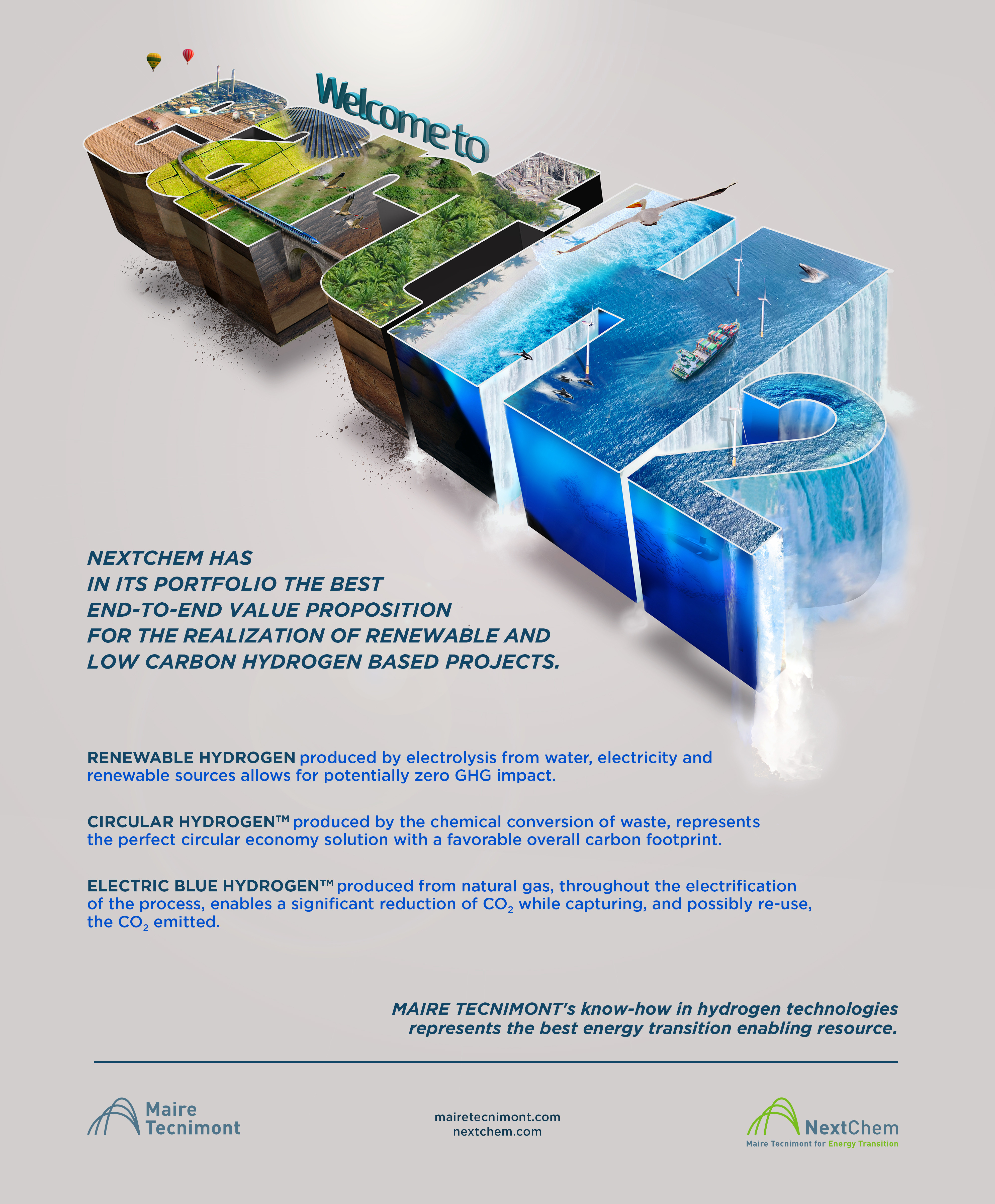 According to the forecasts published in November 2021 by the Hydrogen Council, by 2050 the demand for renewable or low-carbon hydrogen could reach about 660 million tons, constituting 22% of the final energy demand at global level. It will play a key role in the decarbonization process, it can be used in the transport sector, as a raw material in several industrial sectors such as steel or chemical, or as a building block to produce different products, such as fertilizers.

In 2020, global hydrogen demand reached 90 Mt, almost entirely satisfied by natural gas reforming, coal gasification and lignite production. In the same year, given the dominant presence of fossil sources, the production of hydrogen has emitted 900 Mt of climate- changing emissions in the atmosphere (IEA, 2021).

To face up to the global challenges of the industry’s decarbonization through hydrogen, NextChem has adopted a unique business model able to meet the needs of the new developing hydrogen market. Relying on the capabilities of the Maire Tecnimont Group, NextChem is positioned both as a project developer and co-investor in the project development, as industrializer and integrator of innovative technologies, and finally as an EPC contractor in the realization steps.

Thanks to the technical expertise of a leader engineering company in the energy, petrochemical and fertilizer sectors, Maire Tecnimont represents the ideal link between the world of renewables and the world of the process industry and is positioned through NextChem as the optimal partner for any type of end-to-end project related to the decarbonization of industrial processes.

Regarding the projects involving the production and the use of renewable or low-emission hydrogen, NextChem’s offer is divided into several levels:

Thanks to the Group’s organization which integrates various companies with different expertise, Maire Tecnimont through NextChem is able to develop, engineer and realize renewable hydrogen-based solutions, including the entire value chain. NextChem’s offer includes both the realization of plants to produce renewable energy (solar and wind farm, through Neosia Renewables) and plants for the production of high value-added chemicals which use renewable or low carbon hydrogen as feedstock. 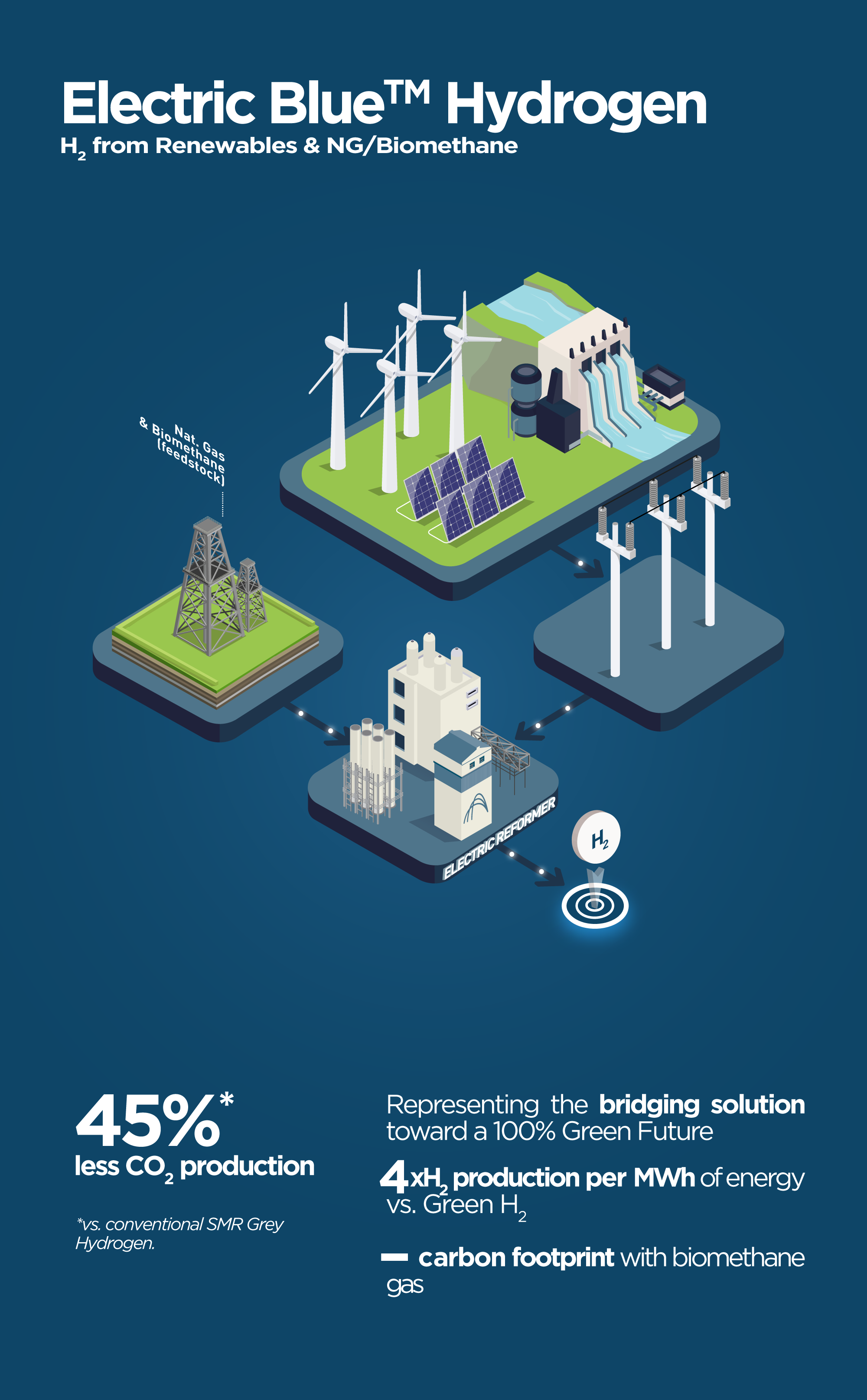 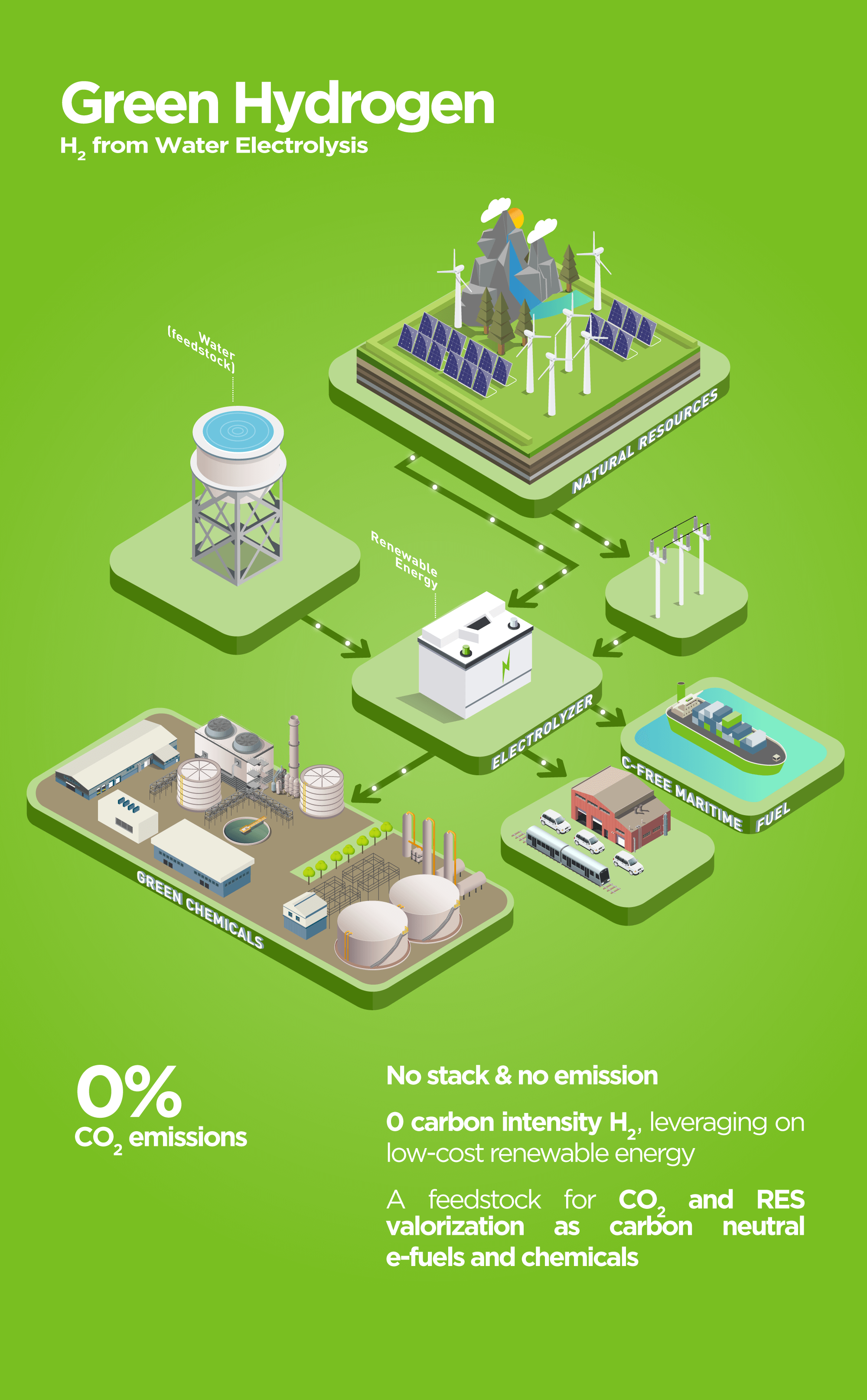 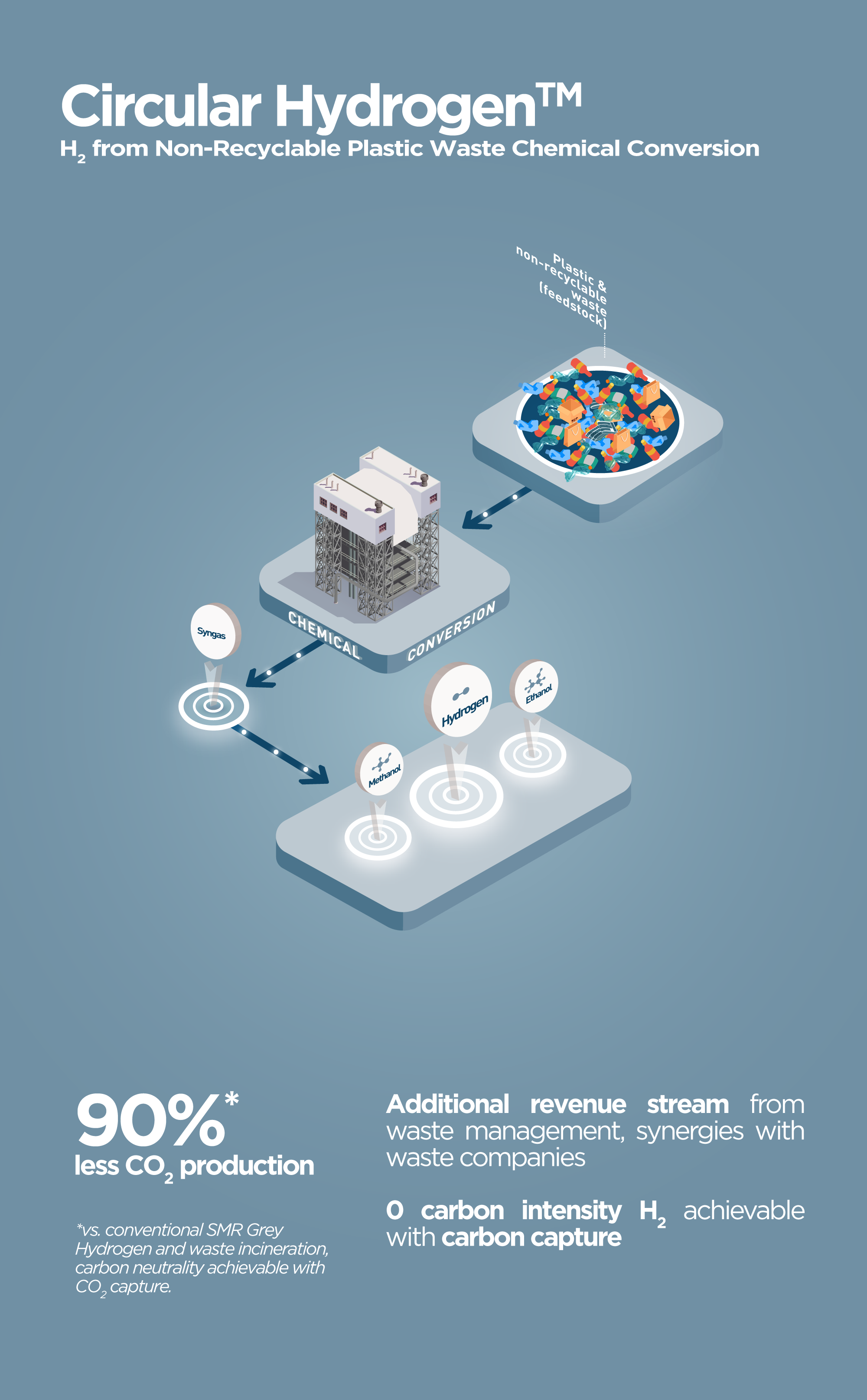 The first one is ElectricBlue Hydrogen® , based on traditional know-how but which involves the use of electricity to feed the endothermic reactions of methane steam reforming. The architecture of the ElectricBlue Hydrogen® is very similar to that of the steam reformer, but the innovation is, beyond the CO2 capture, the electrification of the process, to which is added the possibility to use energy from renewable sources to provide the heat for the reaction. ElectricBlue Hydrogen® can reduce the amount of CO2 emitted by the 45% compared to the traditional process. In addition, thanks to an effective process of capturing CO2 , carried out with a higher partial pressure, it is possible to achieve a further reduction of the CO2 emitted and the energy required for the process is lower.

This technology allows to:

Regarding green hydrogen produced via water electrolysis and from renewable sources, NextChem has access to all the production chain technologies available on the market and is able to optimize their integration in any type of chemical and petrochemical process. The electrolysis of water is an electrochemical process that allows to transform electrical energy into chemical energy. It is the most sustainable version of hydrogen, whose costs of energy supply from RES and electrifier are decreasing over time, although the use of energy from RES and its supply discontinuity have a direct effect on production costs, still too high compared to the production costs of grey hydrogen production. However, the interest in the technology is growing, green hydrogen competes with both fossil fuels and other shades of hydrogen, because it is the only zero-carbon option. For a widespread application of hydrogen, it is important to produce a sufficient volume to meet the demand of the industry, using sectoral synergies, investing in the size of costs and providing flexibility to the energy system. It is important that the main players are EPC contractors, because of their knowledge of each step of processes and technologies functional to the production.

NextChem is developing different projects to produce green hydrogen and its integration into decarbonized chemical processes, including the realization of a plant in the United States with Enel Green Power North America, Inc. (EGPNA). The project provides the supply of renewable energy from the solar plant of EGPNA in America for the production of green hydrogen for a bio- refinery (To read the press release click here). In 2021 NextChem and MYTILINEOS signed an agreement for the engineering activities for the development of a green hydrogen production plant via electrolysis in Italy. The plant will provide local buyers with an alternative carbon neutral energy carrier which could allow a real decarbonization of hard to abate sectors (To read the press release click here). 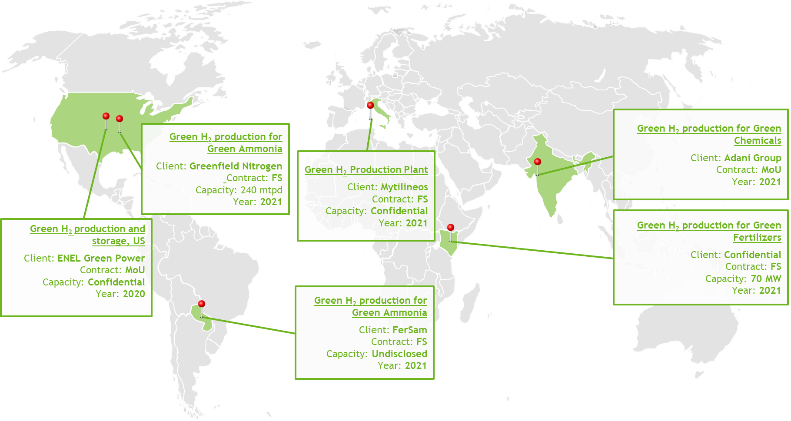 A complementary path that NextChem is developing facing the need of low carbon hydrogen production is represented by Circular Hydrogen® . Circular Hydrogen® is produced by syngas, obtained by the chemical conversion of carbon and hydrogen contained in non- recyclable plastic and dry waste (in Refuse Derived Fuel, in the dry fraction of urban solid waste, in non-recyclable plastic materials, or in waste materials from recycling operations).

Circular Hydrogen® has significant environmental benefits as it can help to solve the problem of non- recyclable waste, currently sent to incineration or disposed in landfill. The production costs are competitive compared to traditional hydrogen. The synergy between the two sectors, that of waste management and disposal and that of the chemical industry, is translated into a very promising technology. This technology is well adapted to the principles of the circular economy and allows to achieve a high overall reduction of the environmental impact, if compared to the traditional approach of waste incineration and conventional synthesis of chemicals from fossil raw materials. Plants for the production of circular hydrogen could be located in traditional energy-intensive industrial sites, such as refineries, and they can contribute to their decarbonization, or close to waste sorting plants by optimizing logistical processes and reducing carbon footprint also in transport.

For more information on Waste to Chemical technology: https://nextchem.it/what-we-do/technologies/waste-chemicals

NextChem has integrated Waste to Chemical technology into the Green Circular District model. To discover more about the technology and model visit https://www.distrettocircolareverde.it/tecnologie/